With an empty schedule and a full cooler, the Karen Marie was once again headed up Narragansett Bay, leaving the real world in her wake. This weekend’s destination of choice was Potter’s Cove, a small-protected harbor on the north end of Prudence Island, not far from Bristol. With no wind to speak of, Karen and I were motoring at a leisurely pace.

It was flat calm, sunny and there was little boat traffic. For weeks I had been meaning to do some man overboard drills with Karen and now seemed as good a time as any. A large inflatable tube would be playing the role of the MOB (who would presumably be me). Just to see what would happen without any prior instruction, I took the large tube and chucked it off the back of the boat. Quick to action, Karen turned the boat deliberately and applied a liberal amount of throttle. Bearing down on the poor tube at 5 knots, I winced before going below deck to dust off my PFD. “Death by my own boat would be a cruel way to go,” I thought.

Alas, like anything in life it took practice but Karen had improved greatly, performing crisp figure eights and pulling alongside the tube, no worse for wear. Having endured more than a dozen strange looks from people wondering why I kept throwing a tube and Karen kept going after it, we continued on to the cove.

I didn’t know too much about Potter’s Cove before hand, except that a colleague described it as: a peaceful peace of water with a good bottom for anchoring. Arriving at lunchtime, the small harbor was abuzz with activity. Powerboat raft-ups were plentiful with groups of 6 or more vessels strung together. Small craft pulling excited children on tubes zig-zagged in front of us. Today would mark our first time anchoring, and this was not the audience we were hoping for.

Finding a spot in the back of the harbor, Karen directed the boat into the wind and I dropped the anchor. Letting out 25-ish feet of line, I quickly tied it off and waited. Much to my pleasant surprise, the anchor took hold immediately.

A natural-born skeptic, I sat on the bow for the next half-hour, watching the boat swing, ready to pounce should the anchor start to drag. I fired up an anchoring app, cleverly named, Anchor! Should the boat drift outside of its pre-determined geo-fence, my phone would automatically call Karen’s phone and sound an alarm. It took a bit of fiddling to determine an the best geo-fence range, but eventually we figured it out. Running both phones around the clock quickly drained their batteries, which provided the opportunity to test two of our other toys, a portable solar charger and a Powerpak Xtreme portable charger from Newtrent. The solar charger was extremely reliable but was slow to charge our phones. The Powerpak, charged our devices swiftly but was not the most user-friendly device. In tandem however they were great portable power sources.

A dinghy ride and subsequent walk through the island revealed, well, not much of anything. Karen and I hiked for miles only to find forest-lined gravel roads and the occasional quaint home. There was no Starbucks. There were no restaurants or movie theatres, and that’s exactly how the 100 year-round residents here seem to like it. Prudence Island is only accessible by boat –there is a car ferry that runs from Bristol. Research, after our visit, revealed that there are three small shops, a couple farms, and a schoolhouse, which was built in 1896 and is still open for kindergarten through fourth grade. It had 9 students last year. 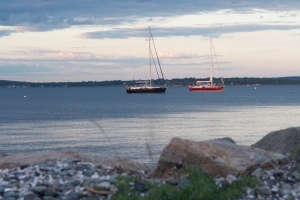 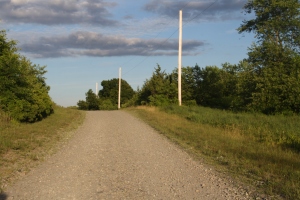 We would have to leave those attractions for our next visit.

An al fresco dinner of steak and asparagus capped off our evening of leisure and exploration. After a full day of sun, I was looking forward to a peaceful night’s sleep. My neighbors on the raft up to the north were not on the same plan. Boozy ballads ranging from What does the fox say?, to the always popular Macharana echoed across the otherwise tranquil harbor. And with all due respect to Billy Ray and his Achy Breaky Heart, I’d be lying if I said I didn’t think about firing a few rounds of flares at the rowdy-raftup.

Watching them stumble around in a hangover haze the next morning made my morning coffee taste that much sweeter. After downing a shortstack of pancakes, Karen and I began the slow sail back to Jamestown.

There are many ways to rate a destination.  Some measure the worth of a place by the number of 5-star accommodations or restaurants, in which case Prudence Island would not be for you. If natural beauty, unspoiled by modern amenities and quiet (damn you crews of SeaDuction and Feeling Nauti) are more your speed, you too might enjoy a brief escape to Potter’s Cove.

Thanks @babysearock, @mcgrathsjk, @laxstud1828 and @elizabeth.mcgrath.923 for our new favorite addition to the boat!
NEW POST: I finally posted the story of our first night on the boat at boyandaboat.com. I hope you enjoy it! #boating #bertram #bedtimestory
Tricking my family into helping me clean the boat since 2013.
Argument: The best kind of nap is a boat nap. The swaying motion, the fresh air, the sweaty lifejacket ... ok, the last isn't our favorite but Connor doesn't seem to mind.
Connor makes another cameo to help talk about a special issue of @powerandmotoryacht
Bottles on the boat just hit different. No one likes mornings like this kid.