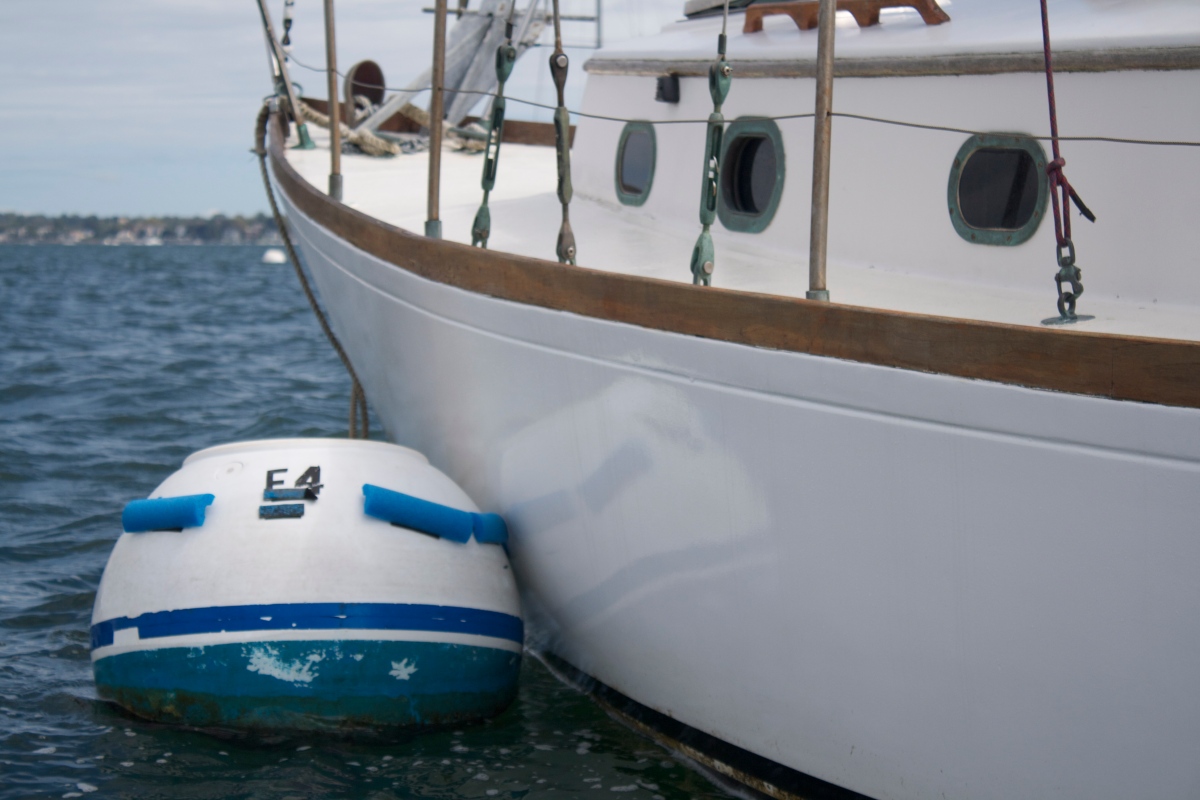 After a full day of sunshine and salt-spray, I crawled into the Karen Marie’s forward V-berth. The gentle rocking of the boat coupled with cool-summer air trickling into the cabin knocked me out almost immediately. I was enjoying peaceful boating bliss.

Bum, bum, bum. Three knocks, not terribly loud but in quick succession and it would all be over.  It sounded as if someone was knocking on the cabin door.  Before I had time to hope it was just my imagination, I heard it again. Groggy and slightly annoyed, I stumbled on deck to investigate. At first, nothing seemed awry. There was no hooligan knocking on my door, no knucklehead trying to raft up and none of my mast rigging was rattling.

It took an embarrassing amount of time to realize my mooring ball bumping up against the hull caused the sound. I tried loosening the lines, then tightening them. I even tried turning the wheel hoping a new rudder direction would grab the current and end this nightmare, but to no avail.

I’ll figure it out in the morning, I reasoned with myself, alone on a damp deck. Sleep would not come easy, as the mooring ball continued to bounce up against the hull. In my mind the mooring ball transformed into a wrecking ball, slamming into my brand new paint job. (In reality, it never left a scratch.)

Some research on the Internet revealed the cause of my problem was that in my location, the current was stronger than the wind, which caused me to grind up on the mooring. What my search didn’t reveal was a solution.

I returned to the office that Monday eager to ask my veteran sailing colleagues about my predicament. I sought out Cruising World’s associate editor, a live aboard sailor with thousands of miles of blue water experience for help.

“There is no answer,” she said from behind unsympathetic eyes and a “good one rookie” kind of grin. She explained that very thing has caused many sleepless nights in her life and that I should just get used to it.

With my tail between my legs, I returned to the mooring determined to just suck it up. After another sleepless night, I realized that wouldn’t work for me.

I channeled my inner inventor and devised a plan. I bought a few pool noodles from the dollar store (hey, I’m on a budget) and some super sticky Velcro from a hardware store. I used a razor blade to cut the noodle in half long ways and then into chunks. I adhered one side on the Velcro to the noodle and the other side to a mooring ball in the spots that usually hit the boat. I called my mooring noodle the Moodle (patent and more creative name pending). 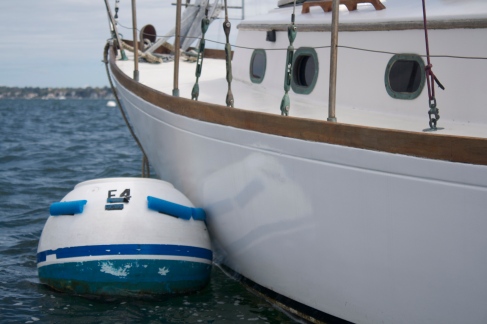 That night I tucked myself into my berth, quite proud of my invention. My smirk would dissipate quickly as an unprotected spot on the mooring tapped against the hull, as if to say, good one Billy Mayes but I’m still here!

The next day at the expense of another dollar, I doubled my efforts in what I’m proud to say significantly reduced the issue. Every once in a while I hear some squeaking from the noodle against the hull but to tired ears, that sounds like victory.

The next day one of the marina employees mentioned that in all his years there he never saw someone attach foam to the mooring. “Most people just get used to it.”

I couldn’t help but laugh as my reputation as the guy who really-really likes his sleep spread through the marina.

Thanks @babysearock, @mcgrathsjk, @laxstud1828 and @elizabeth.mcgrath.923 for our new favorite addition to the boat!
NEW POST: I finally posted the story of our first night on the boat at boyandaboat.com. I hope you enjoy it! #boating #bertram #bedtimestory
Tricking my family into helping me clean the boat since 2013.
Argument: The best kind of nap is a boat nap. The swaying motion, the fresh air, the sweaty lifejacket ... ok, the last isn't our favorite but Connor doesn't seem to mind.
Connor makes another cameo to help talk about a special issue of @powerandmotoryacht
Bottles on the boat just hit different. No one likes mornings like this kid.